Eat, drink, and be merry in Madrid!

MADRID is the capital of Spain. It is also the financial capital and cultural hub for much of Southern Europe.

There is a lot to do, see, and taste in Madrid.

And when Cathay Pacific announced that it was starting direct flights from Hong Kong to Madrid in September 2015, my wife and I decided that this was an adventure too good to pass up.

The plan finally became a reality in October 2016.

Because the forecast was rain for our first day, we decided to just go around and explore the city and what it could offer.

My wife had a must-do list. And it involved eating and more eating! I promptly abandoned my diet!

Madrid has one of the oldest operating restaurants in the world – the Sobrino de Botin. It was founded in 1725, and up to this day, is open for business and thriving!

We tried to get a table but were told by the manager that we needed to call ahead and make a reservation, as they do get busy.

We never got the chance to do that as the next two days were also fully booked so I guess the experience of dining in one of the oldest restaurants in the world has to wait. 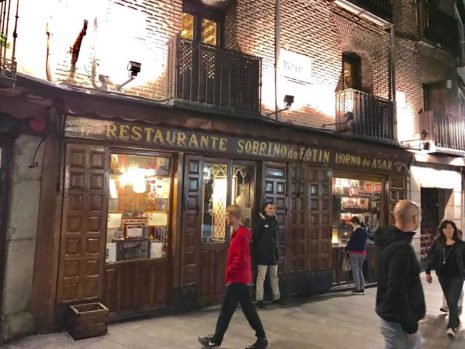 It was also said the great Spanish painter Francisco Goya tended tables here while he was waiting to get accepted into the Royal Academy of Fine Arts.

We continued walking around the famed Plaza Mayor. It is the grand central Plaza in Madrid where tourists and locals walk around, dine (café’s and restaurants line along the square), people-watch or simply enjoy the experience and take it all in.

Right smack in the middle of the plaza, one can find the Statue of Philip the III.  It was during his reign when the Plaza Mayor was built.

A short walk from Plaza Mayor is another known square in Madrid called the Puerta del Sol. It is one of the most popular and busiest places in the city.

This is the centre (Km 0) of the radial network of Spanish roads.

And under the square lies a public transport hub served by lines 1, 2 and 3 of the Madrid Metro. Talk about convenience!

In the middle of the square is a monument of Charles III of Spain, nicknamed “El Ray Alcalde” or simply the Mayor-King in honor of his public works program during his reign and tenure.

Directly across the square is the old Post Office, which also serves as the office of the President of Madrid.

Also in here you will find the statue of The Bear and the Strawberry Tree (or El Oso y el Madroño), which is the symbol of Madrid.

Behind the Statue of the Bear and Strawberry Tree is the Apple Store. We browsed gadgets, used their free wi-fi to communicate with family and friends and of course, posted FB pics of our adventure.

All the walking, exploring and sightseeing made us hungry so we decided to have a snack. And oh boy, we were in for a treat.

A couple of blocks away from the Puerta del Sol in an hidden alley, you can find Madrid’s most famous churros and chocolate place since 1894, the Chocolateria San Gines. The hot chocolate is served in Spanish style – thick, dark and strong – just the way I like it.

Spain is famous for its tapas or small Spanish savoury dishes, typically served with drinks at a bar. And as they say, “do as the Romans do”, so we ventured into a tapas adventure right the next day. 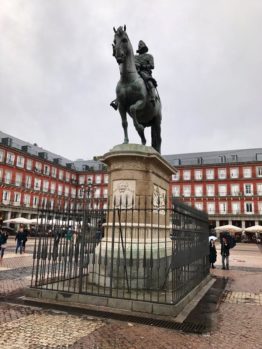 Then off we went to the Mercado San Miguel.

This lively old market space, near Plaza Mayor, has been converted into stalls where you can savor food and drink from around Spain.

We had Sangria, (widely considered as a punch, and traditionally consists of red wine and chopped fruit, often with other ingredients such as orange juice or brandy), seafood paella, and some jamon Iberico. They sliced the tender meat so thin thin that it literally melted in our mouths. 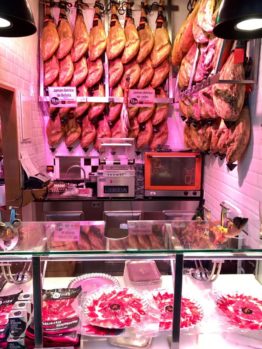