Graduating with honors, the CFC-FFL

The graduates saluting with Godly honors at Epiphany Chapel in Muiwo.

The CLS seminar provided reminders for us to be real Christians in ways and in deeds.” Long time HK resident Tonette Cruz says, “ The seminar gave me the true meaning of the word Christian, that if we remove Christ in the word, what is left is ‘IAN’ to mean I Am Nothing.” The Christian Life Seminar is an integrated course leading to a renewed understanding of God’s call to Christian couples and individuals, including singles, single parents, married but separated by place from spouse, separated or divorced and widows or widowers.

The seminar at Epiphany Chapel, which started last November 2018, was organized and conducted by the
Lantau unit of the Couples for Christ Foundation for Family and Life ( CFC-FFL ) led by couples Danny and
Set Bilo, Joel and Tess Unciano together with Ariel and Monique Quiambao, Ms. Cristy Wang, Ms. Grace Oddi
and CFC youth leader Pao Bilo. Servant leaders of CFC-FFL HK Adhee Daluz, Felix Baracca, Ronald and
Jenny Gabriel, couples Noel and Miriam Soliva, Jonas and Cleone Baradas, were also with the Lantau team
on most of the Sunday afternoon sessions, spread over the period November 2018 to February 2019.

There was orientation and structured modular teaching during the four-month period about the basics of
Christianity, authenticity of a Christian life and a spirit-filled Christian life. Guided by the scriptural theme found in
Revelations 3:20, ‘Behold, I stand at the door and knock; if anyone hears My voice and opens the door, I
will come into him and will dine with him, and he with Me”, the participants were truly made aware of
the character of a Christian.

Following the principles taught and the goal to live a life the CFC-FFL way, the graduates declared their
commitment to be active in the mission and vision of the CFC-FFL, adhering to its core values namely (1)
centered on Christ, (2) Evangelistic and Missionary, (3) Focused on the Family, (4) being Community , (5)
Living a Preferential Option for the Poor, (6) Exercising Servant Leadership and (7) Being a servant
to the Church. Talking about servant leadership, the graduates were glad to hear the testimony sharing of Pao Bilo, 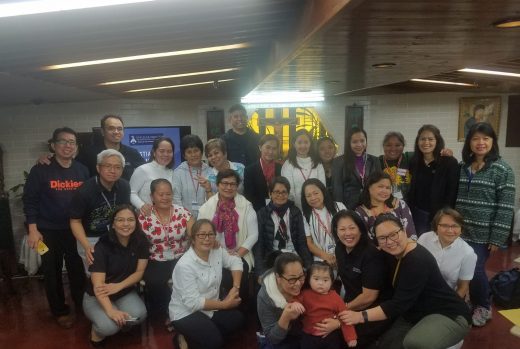 Bro. Danny Bilo, CFC-FFL Tung Chung chapter leader, inspiring the graduates with the blessing of having a Christian community.

leader of CFC- Youth for Family and Life HK ( CFC- YFL) and who also played piano during CLS sessions’ praise and worship service at Epiphany. He said that Christ was the reason for what he has become today,- a spiritually strong person who leads young people in the Christian community. He amusingly added that were it not for Jesus he would have ended up a leader of the gangster community instead of the leader in the CFC youth ministry.
Indeed, to graduate under the CLS-CFC-FFL curriculum is truly an achievement leading to true Christianity.