Serving the Lord with praise and joyful songs

OVERSEAS Filipino worker Emely Cabanas Balabis, 36 years old and from Leon, Iloilo, came to Hong Kong in June
2010 in order to support the family and help her four children—a son and three daughters—in their schooling. She is now into her 2nd contract with an American family, her fourth employer since coming here.

As a young girl of five, Emely was already an avid fan of pretty singer Sheryl Cruz and liked singing the teenstar’s pop
song, ‘Ikaw ang true love ko’. When she was 10, she became a member of her parish church choir, which
started her embracing the beauty of gospel music. More importantly, her love and testimony of God and His goodness grew and blossomed in this environment. Of the many church hymns she sang during choral presentations from then until now, there are two that remains her favorites, -‘Lead me Lord’ and ‘I know that my Redeemer
lives’.

Asked if she enjoys gospel music more than any other genre, Emely said: “I also love pop, slow rock, country song and classical. But singing the songs of God makes me more joyful and spiritual. I thank the Lord for giving me this talent as it boosts my confidence and makes me interact with people often.” This social interaction started early in
her life—from the time she joined school contests in primary days until her becoming a glee club member in high school, where she was awarded the ‘Songbird of the Year’.

When she was in college at Western Institute of Technology, she has represented her B.S. Office Administration department in a school classical singing contest where she won third place. She also had that rare opportunity to serenade the then-Iloilo Governor Neil Tupas when the governor was the guest speaker in one of the school
events. Emely or ‘Emz’ as she is fondly called by friends, names Celine Dion, Regine Velasquez, Shania Twain and Leah Salonga among her celebrity idols and she has done did covers of their hit songs. She also did a cover of John Legend’s “All of Me” in her “emz cabanas” Youtube channel. Emz is not only good in singing but also in modern and ballroom dancing. She used to choreograph her group’s dance performances while attending college in Iloilo.
And she continues to do so now that she is in HK, where she leads her group of friends during community and church events. Whether it is “zumba”, a “boogie-boogie cha-cha” or “macarena”, Emz is ready to choreograph and define every step you need for that dance-able beat. It is this “singing and dancing beat” that bonds mom with her three daughters—Rachelle Juliana(14), Relyka Nicole (12) and Rianne Chloe (11). 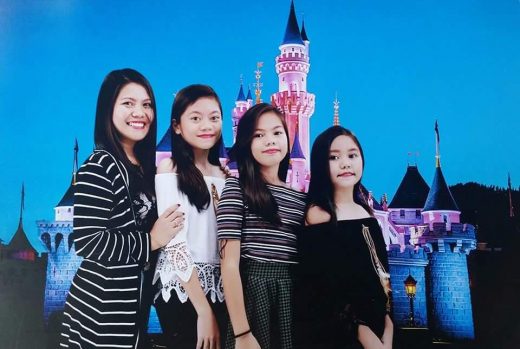 They always look forward to this “like mother, like daughter” bonding moments every time mom is on holiday back home. Her three daughters can sing and dance as well like mommy. When asked why she always have that beautiful smile, talented Emely is inspired to quote Psalms 100:2 which declares: “Serve the Lord with gladness and come before His presence with singing”. She may not have won the grandiest of the singing contests nor reach the fame of Sheryl Cruz but she, nevertheless, is truly thankful to God for the gift of singing and the gift of being guided by Him in the journey of life. If she can do a special cover, she can dedicate one for the Lord and sing “Ikaw ang true love ko”.