Starting 2020, the Philippine Health Insurance Corp.  (Philhealth) will increase the premium rate of direct contributors, which include OFWs, from 2.75 percent of their monthly salary to 3 percent.

For OFWs earning P20,800, this will translate to an annual payment of P7,488, more than thrice of the annual payment before, which only amounts to P2,400. 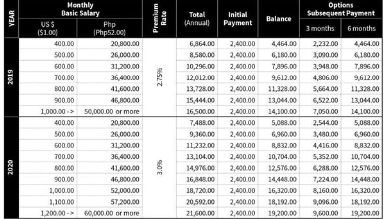 The increase came into effect on Dec.7, 2019 but the payment period will start this January 2020. The hike in rates came following the enactment of Republic Act No. 11223 or the Universal Health Care Law in March 2019.

“The new premium schedule takes effect on December 7, 2019 or 15 days after the publication of its Circular 2019-0009. Its application for employed members will be for the applicable month of December 2019 (which is payable on January 2020),” the Philhealth said in an advisory on Dec.2,2019.

OFWs – both newly-hired and returning or those called Balik-Manggagawa – will have to pay the said Philhealth premium rate as part of the requirements for the overseas employment certificate or OEC. The OEC is an exit clearance which OFWs have to secure first before they can leave the Philippines to work abroad.

As part of the transition, OFWs will give P2,400 first as part of the initial payment so they can obtain their OEC, but they will have to pay the remainder after 6 months in full.