Mel Santiago, a foreign domestic worker who worked in Hong Kong, was able to fly back to Manila on Wednesday after a three-month ordeal which involved living under a flyover in Tsuen Wan. (COURTESY: Mel Santiago)

A Filipina domestic worker who lived under a flyover in Tsuen Wan for more than two months was finally able to fly back home to the Philippines on Wednesday.

Mel Santiago left Hong Kong on Wednesday morning after a support group, Social Justice for Migrant Workers, was able to give her HK$1,000 and a ticket. She is currently under quarantine in Manila.

The 40-year-old Filipina left her former employer in Ma On Shan on the evening of May 7 following an argument over food. The Filipina claimed she feared getting hurt after her employer allegedly threw chopsticks at her so she offered to leave, but her employer reportedly refused to let her go.

She complained of being overworked and also claimed she was made to sleep in a small alcove above a storage area.

[Translation: I was just trying to withstand it because I need money because I have four kids. I really wanted to finish the contract but in all honesty, I could not handle it.]

Having nowhere else to go, Santiago decided to sleep in a makeshift shanty under a flyover where she previously hid her things. She said a local Chinese cleaner helped her survive by giving her a cot, a blanket, a pillow, and some food. 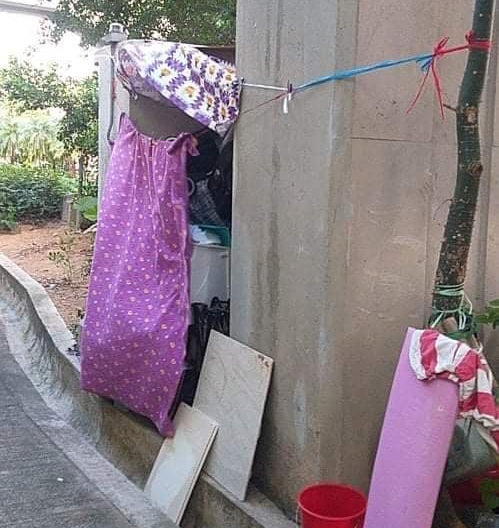 This makeshift shanty under a flyover in Tsuen Wan was Mel Santiago’s abode for more than two months in Hong Kong. (PHOTO COURTESY: Marites Palma/Social Justice for Migrant Workers)

On May 9, Santiago reported her dispute with her employer to labour officers in Tsuen Wan. She was allegedly told her case will be referred to the police.

She then went to the Philippine Overseas Labour Office on May 27 to seek assistance to contact the labour representatives before her conciliation meeting with her employer on May 29.

But during conciliation, the labour officer reportedly told Santiago that there was no police report found. Because of this, her case did not count as “constructive termination” and she had to pay arrears to her former employer—which covered her airfare and wages.

Santiago said she returned to the Consulate on July 7 after her loss to seek repatriation. But she was reportedly told that she needed a ticket, which she said stressed her out even more.

SJFMW founder Marites Palma, a domestic worker, found Santiago when she posted her frustrations on Facebook. Palma said she met Santiago shortly after that and saw how down she was.

Palma then offered to help Santiago to acquire a plane ticket through a fundraiser and a temporary place to stay in.

Tamayao told Hong Kong News that the Overseas Workers Welfare Administration and the Department of Social Welfare and Development gave her financial assistance.

“I was able to require the agency to refund the 14 days boarding house fee, and endorsed her [to] OWWA Region 3 for the OWWA Pangkabuhayan Program as a distressed OFW,” Tamayao said.

A police officer contacted Santiago on July 20, saying they found the Labour Department’s referred report. She said the officer asked her when she could give a statement, but she told Hong Kong News that she just wanted to go back home.

Santiago said she does not blame anyone for what happened to her but asked for improvements in the Philippine Consulate’s services offered to distressed OFWs.

[Translation: I wish we had a process that requires asking the problems of helpers who approach you first and foremost. I wish that when the helper starts relaying her problems, you’re already writing in down in a blotter.]